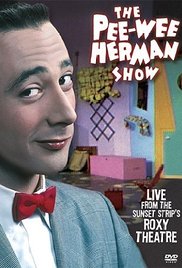 Where to watch The Pee-wee Herman Show
An adult-oriented version of what would eventually become an award-winning children's classic. This version of the show features Pee-wee's playhouse and many of the characters of the later series, but with adult and sexual overtones and jokes including "mirror shoes" and others. Written byJoe Pranevich <knight@wwaves.com>

" I first saw this show on HBO in the early 80's, and watched a dozen times before tears from laughing so hard began to slow"