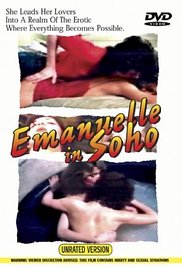 Where to watch Emmanuelle in Soho
The first portion of this film is a documentary on the adults-only entertainment industry prevelent in London's Soho District. The second details the trials and tribulations of a struggling photographer, his unsatisfied wife, and their friend Emmanuelle, as they try to make it big in Soho. They decide their ticket to success will come by blackmailing a wealthy adult film tycoon. Written byJonathan Ruskin <JonRuskin@aol.com>

"It's all very silly, padded out with endless softcore sex sequences that are anything but titillating"