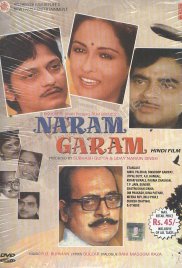 Where to watch Naram Garam
The story revolves around an old man, chachaji in search of a home after his house is repossesed by the village money-lender, and his young daughter, Kusum. Ramprasad is a poor young man in the employ of Bhavani Shankar a superstitious, middle aged widower. Ramprasad succeeds in securing a victory for Bhavani Shankar in a long running court case, which gives back Bhavani Shankar's family the possession of an ancestral house. When Ramprasad is assigned the responsibility of getting the house back in shape so that it can be re-occupied, chachaji and Kusum arrive there. When this comes to the knowledge of the estate manager, Gajanan Babu, he arrives furious and determined to oust the usurpers. However, he succumbs to the charms of Kusum and instead of ousting the old man and his daughter, presents a proposal of marriage. Horrified, Kusum and Ramprasad turn to Babua for help. He, in turn, is captivated by Kusum's beauty and presses his suit. Then Ramprasad turns to Bhavani Shankar, but he... Written byVijay

" He knows you cannot challenge your boss because earning a living is equally important as getting a girlfriend, but through diplomacy and a little bit of white lies he gets his way in the end"