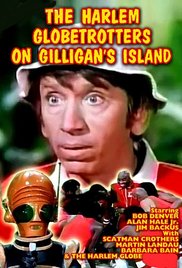 Where to watch The Harlem Globetrotters on Gilligan's Island
The famous Harlem Globetrotters crash land on Gilligans Island, immediately dispatching a terrifying 'shark' by throwing basketballs at it. A mad doctor and his accomplice plan to take over the island for its rich energy supply by scaring off Gilligan and his buddies, but it soon settles to a basketball match between the doctors robots and the aforementioned Globetrotters Written byPaul cartwright <cartwrit@vianet.net.au>