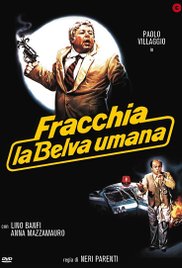 Where to watch Fracchia la belva umana
Giandomenico Fracchia must be the world greatest loser: his colleagues at the chocolate factory make fun of him, his boss harrasses him, the woman he loves hates him... and things are going to be even worse! Fracchia is the lookalike of the Belva Umana (the Human Beast), the most dangerous criminal in the world. Because of this, he manages to get arrested (and heavily questioned) three times in one night. He is given a special safe-conduct by the police, but when he returns back home the Belva Umana is waiting for him... Written byMicio Nero