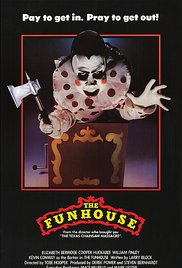 Where to watch The Funhouse
The teenager Amy Harper dates Buzz Dawson for the first time and they go to the carnival with their friends Richie and Liz. They smoke grass and have good-time visiting the attractions including a side show with freak animals. The silly Richie suggests the group to spend the night in the Funhouse for fun. During the night, they witness the murder of the fortune teller Madame Zena by a man wearing a mask of Frankenstein from an opening in the ceiling of a room. They decide to leave the fun house but they find all the exits locked. Meanwhile Richie sneaks in the room and steals the money of the manager of the place. The masked man returns with his father and owner of the fun house to show the corpse of Madame Zena; when the man realizes that he had been robbed, he presses his son that removes the mask and shows his horrible face. Richie startles and drops his lighter in the room. The owner asks his freak son to chase the thieves and eyewitnesses in a night of terror for the teenagers. Written byClaudio Carvalho, Rio de Janeiro, Brazil

" Richie startles and drops his lighter in the room"