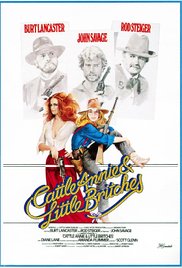 Where to watch Cattle Annie and Little Britches
In 19th century Oklahoma two teen girls, fans of stories about outlaws, are on a quest to meet and join up with them. They find a shadow of a former gang and although disappointed still try to help them escape from a vigorous marshal.

" The dialogue is sensational, and the acting, including terrific performances by Scoot Glenn and John Savage, could not be better"