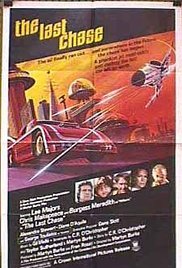 Where to watch The Last Chase
In a future United States, the only transport available to an individual is public transportation. Predicated on an assertion that "the oil has run out", an increasingly totalitarian central government has ordered all personal vehicles be impounded by law. One man, a former race car driver, yearns again for his ability to choose his own roads and destiny. He reassembles his race car hidden from confiscation, and sets out for "Free California" which has broken away from the new regime, aided by a young technically savvy teen who feels alienated from this "social" society. Agents of the new government must stop this man at any cost to destroy the symbology he represents, and the instability that such a desire for personal autonomy could mean to the society. An old Korean War veteran and his F-86 Sabre jet are called into service to chase down this dangerous man, and end his flouting of the will of the state. In the words of one of the government agents, "People going where they want to,... Written byAGC