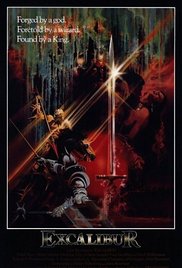 Where to watch Excalibur
The myth of King Arthur brought once again to the screen. Uthur Pendragon is given the mystical sword Excalibur by the wizard Merlin. At his death Uthur buries the sword into a stone, and the next man that can pull it out will be King of England. Years later Arthur, Uthur's bastard son draws Excalibur and becomes king. Guided by Merlin, Arthur marries Guenivere and gathers the Knights of the Round Table. Arthur's evil half-sister Morgana sires a son with him, who may prove his downfall. Written byGreg Bole <bole@life.bio.sunysb.edu>

" Having seen the film numerous times, I still get more out of it with every viewing"