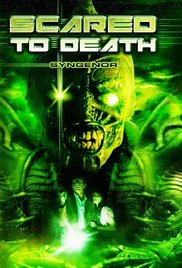 Where to watch Scared To Death
An ex-cop, now working as a hack novelist, is called out of retirement to help investigate a string of deaths that appear to be the work of a serial killer but soon are revealed to be the work of the Syngenor - the synthesized genetic organism! Written byBrian J. Wright <tyrannorabbit@hotmail.com>

") Still, this movie is an okay time-waster if you happen to enjoy bad sci-fi or horror"