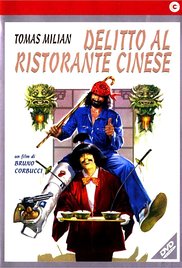 Where to watch Crime at the Chinese Restaurant
The officer Nico Giraldi investigates a homicide which has taken place in a Chinese restaurant in Rome. His wife and his son are kidnappeded by the murderer in the course of the inquiry. In the end the case is worked out. Written byPiergiorgio Romani <p.romani@flashnet.it>

" Beside Milian, a great Bombolo ,this time with Enzo Cannavale, the Neapolitan actor who used to be his partner in some theater pieces of the time ( by the way, Bombolo used to sell umbrellas on a Ape Piaggio, when he was " discovered" and became a cinema star , of course of trash cinema)"

Crime at the Chinese Restaurant trailer