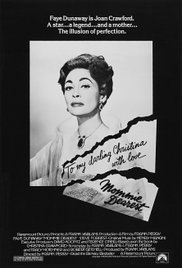 Where to watch Mommie Dearest
Based on the book about Joan Crawford, one of the great Hollywood actresses of our time, written by her adopted daughter Christina Crawford. Joan decides to adopt children of her own to fill a void in her life. Yet, her problems with alcohol, men, and the pressures of show business get in the way of her personal life, turning her into a mentally abusive wreck seen through the eyes of Christina and her brother Christopher, who unwillingly bore the burden of life that was unseen behind the closed doors of "The Most Beautiful House in Brentwood." Written byGeoffrey A. Middleton <gamidd01@morehead-st.edu>

" Mind you, there's nothing WRONG with Dunaway's performance, as a matter of fact, it's really good, but what's so good about it is how she plays every scene with fearless abandon, whether it's the wirehanger scene, the departure from MGM or chokeslamming Christina through a glass table, Dunaway gives 100% percent! And you should too! The first half is MUCH more frenetic then the 2nd half (aka young Christina vs Old) and the first part has all the best bits, but not to say the 2nd part is good too, it really starts to mellow out and (gasp) you start to feel SOME compassion to the old broad"