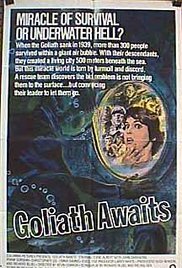 Where to watch Goliath Awaits
During World War II the passenger liner "Goliath" is sunk by a German submarine. Portions of the ship's hull remain airtight, and some of the passengers and crew survive. Over the decades they build a rigidly regulated society completely isolated from the surface world, until in contemporary times a diving team begins to explore the wreck. Written byMarg Baskin <marg@asd.raytheon.ca>