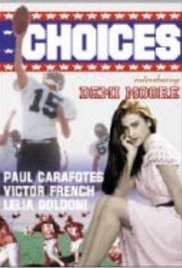 Where to watch Choices
Partially deaf teenager Carafotes becomes alienated when prevented from playing football because of his handicap. He must deal with his parents, coach, teammates, his new girlfried and a bad crowd he almost falls into, before confronting the school board. Written byAnonymous

" While it has An Afterschool Special feel to it, one must remember that the ABC Afetrschool Specials were beautifully made that stressed positive family values"