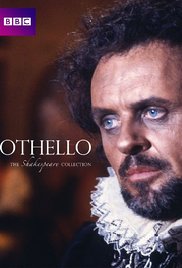 Where to watch Othello
Iago and a comrade-in-arms are outside the Venice home of Desdemona's father, who does not yet know that she has eloped with Othello. Iago confides to his friend -- who had hoped to marry Desdemona -- that he serves Othello to further his own ends. Venice needs Othello to protect its commercial interests in Cyprus where the Turkish fleet is headed. Desdemona insists on going to Cyprus, too. In Cyprus, Iago plots to convince Othello that Desdemona has betrayed him with Cassio. A lot more than political ambition seems to be motivating Iago. Written byDale O'Connor <daleoc@interaccess.com>

"I think the writer at this stage in his life worked from the outside in, focusing on the forces that are unloosed in the world, then forming images and analogies that finally can map to some story he finds"