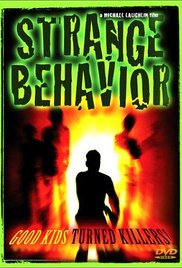 Where to watch Strange Behavior
Widowed John Brady is the Chief of Police in small town Galesburg, Illinois, where he has lived most of his life. His only offspring, Pete Brady, is a bright high school senior. John has been in turmoil since the suspicious death of his wife Catherine years earlier, which he always believed had something to do with her boss, Dr. Le Sange, who himself died shortly after Catherine's passing. Only recently has John and Pete's home life gotten back on track with John dating Barbara Moorehead, a waitress at the local hangout, she who has known John for some time. John's life takes a turn for the worse when he has to investigate the brutal slashing murders of four townsfolk in four separate incidents. A brief eyewitness statement to one of the murders before the eyewitness herself is murdered is the only substantive evidence. However, the three other victims were the sons of long time friends of his. Those three friends have a special connection to John's past. As such, he believes if the ... Written byHuggo

" It does leave some uneasiness, and does offer some shocking scenes that, while not elaborate, are still pretty gory"