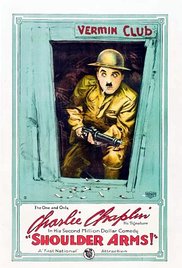 Where to watch Shoulder Arms
Charlie is in boot camp in the "awkward squad." Once in France he gets no letters from home. He finally gets a package containing limburger cheese which requires a gas mask and which he throws over into the German trench. He goes "over the top" and captures thirteen Germans ("I surrounded them"), then volunteers to wander through the German lines disguised as a tree trunk. With the help of a French girl he captures the Kaiser and the Crown Prince and is given a statue and victory parade in New York and then ... fellow soldiers wake him from his dream. Written byEd Stephan <stephan@cc.wwu.edu>

" It's also preferable in many respects to a "more serious", dramatic work with a similar message, such as Griffith's "Hearts of the World""