What is Sisters about? 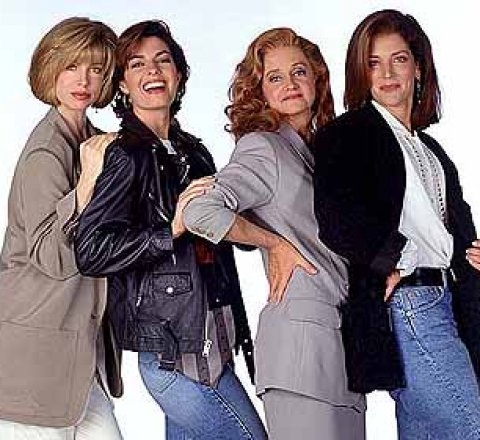 Sisters introduced us to a group of sisters, Alex (Swoosie Kurtz), Georgie (Patricia Kalember), Teddy (Sela Ward), Frankie (Julianne Phillips) and Charley (Jo Anderson & Sheila Kelley). They dealt with life, love, children, death, divorce, marriage and virtually everything else. All through they were held together by their mother, Bea (Elizabeth Hoffman). The show became a hit with viewers. In the first episode we saw Teddy write the word 'Slut' on her sister Frankie's car, and in the last episode we saw the sisters deal with the death of their mother. The audience got to know and love these sisters... During it's run, Sisters earned one Emmy, which went to Sela Ward in 1994. In total, it received 5 Emmy nominations. Sisters was nominated for two Golden Globes during its six season run: in 1993 (for Best Series-Drama) and in 1994 (for Best Drama Actress-Sela Ward). Kurtz was nominated for a Screen Actors Guild Award in 1995 and Ward was nominated in 1996. Some

Episode 1: Moving In, Moving Out, Moving On
Episode 2: 80%
Episode 3: A Thousand Sprinkles
Episode 4: Devoted Husband, Loving Father
Episode 5: Of Mice and Women
Episode 6: Deja Vu All Over Again
Episode 7: Some Tuesday in July

Episode 1: Sunstroke
Episode 2: The Bottom Line
Episode 3: A Promise Kept
Episode 4: And God Laughs
Episode 5: Sins of the Mothers
Episode 6: Lost Souls
Episode 7: Accidents Will Happen
Episode 8: Crash and Born
Episode 9: The Best Seats in the House
Episode 10: Rivals
Episode 11: Portrait of the Artists
Episode 12: Teach Your Children Well
Episode 13: All That Glitters
Episode 14: Crimes and Ms. Demeanors
Episode 15: The Whole Truth
Episode 16: Things Are Tough All Over
Episode 17: Moving Pictures
Episode 18: Mirror, Mirror
Episode 19: Different
Episode 20: Dear Georgie
Episode 21: Some Other Time
Episode 22: The Cold Light of Day
Episode 23: Out of the Ashes
Episode 24: The Icing on the Cake

Episode 1: Back on Track
Episode 2: The Land of the Lost Children
Episode 3: Demons
Episode 4: A Kick in the Caboose
Episode 5: Sleepless in Winnetka
Episode 6: The Good Daughter
Episode 7: Something in Common
Episode 8: A Bolt from the Blue
Episode 9: The Best Intentions
Episode 10: The Things We Do For Love
Episode 11: Broken Angel
Episode 12: Second Thoughts
Episode 13: A Path Through the Snow
Episode 14: Chemical Reactions
Episode 15: Poison
Episode 16: Tangled Webs
Episode 17: Up to His Old Tricks
Episode 18: Blood is Thicker Than Water
Episode 19: Lock and Key
Episode 20: Life Upside-Down
Episode 21: Protective Measures
Episode 22: Up in the Air

Episode 1: Bombshell
Episode 2: Blinders
Episode 3: I Only Have Eyes for You
Episode 4: Falling Leaves
Episode 5: Heroes
Episode 6: Scandalous
Episode 7: Down for the Count
Episode 8: Cold Turkey
Episode 9: Paradise Lost
Episode 10: Twilight Time
Episode 11: A Child is Given
Episode 12: No Pain, No Gain
Episode 13: A Lullaby to My Father
Episode 14: A Good Deed
Episode 15: A House Divided
Episode 16: A Proper Farewell
Episode 17: Angel of Death
Episode 18: Sleeping with the Devil
Episode 19: Judgement Day
Episode 20: Word of Honor
Episode 21: Remembrance of Sisters Past
Episode 22: A Fighting Chance
Episode 23: Matters of the Heart
Episode 24: Enchanted May