What is Dinnerladies about? 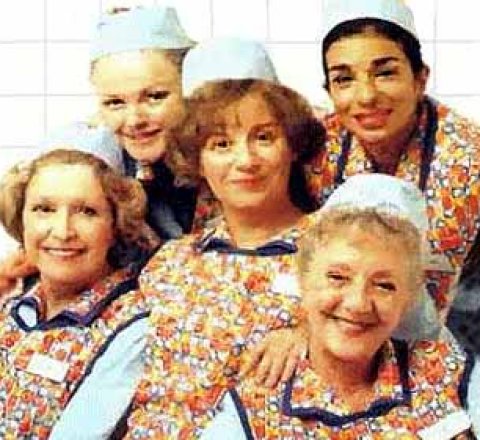 Created by, written by and starring the one and only Victoria Wood, Dinnerladies chronicles the antics of a group of workers in a "manky old canteen" up in the north of England. Bren (Wood) tries to maintain a semblance of order in amongst the chaos, while dealing with her unspoken love for the canteen supervisor, sex-obsessed cancer sufferer Tony. Dolly and Jean are the bickering menopausal older women, always at odds but best friends underneath it all. Then there's thick-as-two-short-planks Anita, always off living on her own planet, and the terminally uninterested Twinkle, more concerned with her sex life and having a good time than anything else. Making up the motley crew are military man Stan, the handyman, obsessed with following rules and regulations, and ditzy Philippa, the Personnel officer, who never seems to get anything right. Dinnerladies ran for two seasons, from 98 to 2000, and ended due to Victoria Wood's refusal to do any more. Like the best sitcoms