What is Then Came Bronson about? 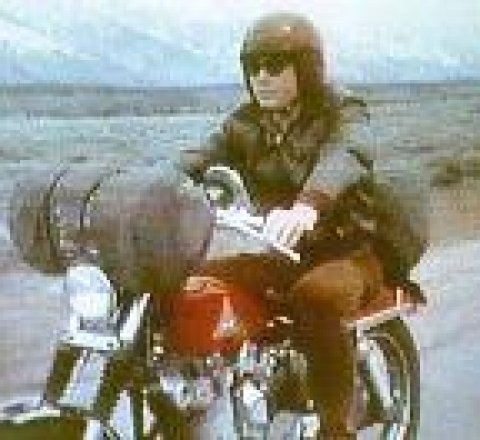 Ever since the Hellenic Homer wrote The Odyssey, tales of travel and adventure have been an important component of western literature. By the late nineteen fifties two works of art captured the imagination of readers and viewers of television. The first was Jack Kerouac's popular beat novel On the Road (1957). Then, ten years later, in the late sixties, Jim Bronson played on television a forlorn newspaperman disillusioned after the suicide of his best friend and "working for the man." In order to renew his soul he becomes a nomadic vagabond searching for the meaning of life and experience what life has to offer. In the process he shares his apparent noble values with the people he meets and lends a helping hand when he can. Our hero rides a Harley Sportster, and, as such, was viewed by many fans as a modern version of the solitary cowboy meandering the American west. The television series began

Season 1 of Then Came Bronson

Episode : Old Tigers Never DieThey Just Run Away
Episode 1: The Runner
Episode 2: The Old Motorcycle Fiasco
Episode 3: ...A Famine Where Abundance Lies
Episode 4: The Circle of Time
Episode 5: Where Will the Trumpets Be?
Episode 6: Amid Splinters of the Thunderbolt
Episode 7: The 3:13 Arrives At Noon
Episode 8: Old Tigers Never Die—They Just Run Away
Episode 9: Your Love is Like a Demolition Derby in My Heart
Episode 10: Two Percent of Nothing
Episode 11: All The World and God
Episode 12: A Long Trip to Yesterday
Episode 13: The Spitball Kid
Episode 14: Against A Blank Cold Wall
Episode 15: Sibyl
Episode 16: A-Pickin' an' A-Singin'
Episode 17: The Gleam of the Eagle Mind
Episode 18: That Undiscovered Country...
Episode 19: Lucky Day
Episode 20: Mating Dance for Tender Grass
Episode 21: The Mountain
Episode 22: Still Waters
Episode 23: The Forest Primeval
Episode 24: The Ninety-Nine Mile Circle
Episode 25: The Mary R
Episode 26: What's An Ark Without Centaurs?
click here to see where to watch

Pro Am Equalizer
Attack No.1
Room 222
Probe
In The Firing Line
What the Tudors and Stuarts did for us
The Runaway
Gentle Crack Down II
Watch TV Series
Watch Movies
Paid TV sites
Privacy Policy
Watch Then Came Bronson online