What is My Hero about? 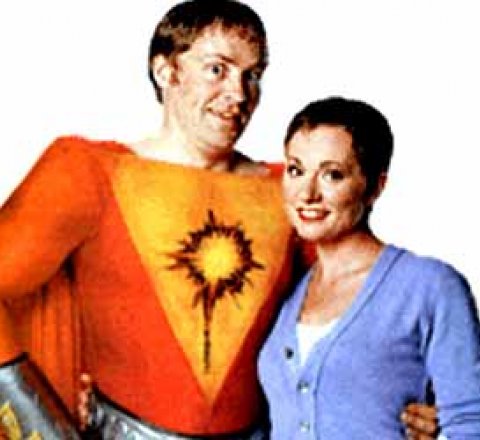 George Sunday (Ardal O'Hanlon) is a mild-mannered shopkeeper who has an "alter ego". Whenever danger threatens, he changes into the superhero "Thermoman" and rushes off to save the world. One day, Thermoman saves Janet Dawkins (Emily Joyce) from certain death when she falls into the Grand Canyon. He takes a fancy to her and decides that he wants to get to know her better. He tries to get to know her as "George", since he doesn't want her to know about his "alter ego". Things don't go quite according to plan, however. George soon has to reveal to Janet that he's really Thermoman. She accepts him anyway and the two end up living together.

Season 1 of My Hero

Season 2 of My Hero

Season 3 of My Hero

Season 4 of My Hero

Episode 1: A Sporting Chance
Episode 2: The Living Dead
Episode 3: Taking the Credit
Episode 4: It's All in the Mind
Episode 5: Space Virus
Episode 6: The Mayor of Northolt
Episode 7: Big
Episode 8: The Consultant
Episode 9: The Family Way
Episode 10: Time and Time Again

Season 5 of My Hero

Season 6 of My Hero