What is Fraggle Rock about? 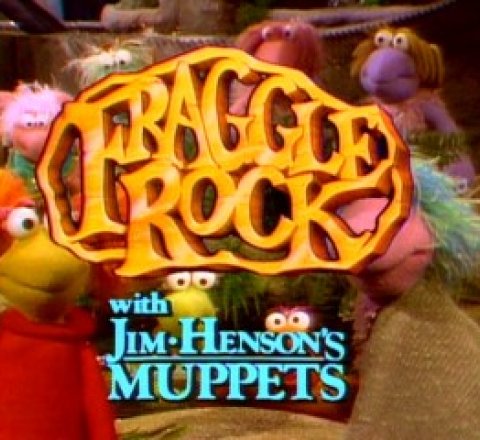 Somewhere in the world, there is a workshop owned by a an inventor named Doc and his Dog, Sprocket. While Doc spends his days coming up with new ideas, Sprocket is peering into a large hole in the baseboard. He knows that something lives behind the wall. Through the hole and down the tunnel, hidden from everyday reality, are brightly lit caves filled with wonderful creatures. This land, bound together by Magic, is called Fraggle Rock. The most notable of the creatures who inhabit this beautiful place are the Fraggles. Fraggles are furry, have tails, and come in all sorts of colors. The Fraggles spend their days laughing, splashing, running, singing, playing games, and telling jokes. They live by a simple care-free code.

Extras
Episode 1: Down at Fraggle Rock: Behind the Scenes
Episode 2: New Interviews with Cast and Crew
Episode 3: Jim Henson Documentary

Episode 1: Beginnings   (watch here)
Episode 2: Wembley And The Gorgs
Episode 3: Let The Water Run
Episode 4: You Can't Do That Without A Hat
Episode 5: The Thirty-Minute Work Week
Episode 6: The Preachification Of Convincing John
Episode 7: I Want To Be You
Episode 8: The Terrible Tunnel
Episode 9: The Lost Treasure Of The Fraggles
Episode 10: Don't Cry Over Spilt Milk
Episode 11: Catch the Tail by the Tiger
Episode 12: The Finger Of Light
Episode 13: We Love You, Wembley
Episode 14: The Challenge
Episode 15: I Don't Care
Episode 16: Capture The Moon
Episode 17: Marooned
Episode 18: The Minstrels
Episode 19: The Great Radish Famine
Episode 20: The Garden Plot
Episode 21: Gobo's Discovery
Episode 22: Mokey's Funeral
Episode 23: The Beast Of Bluerock
Episode 24: New Trash Heap In Town

Episode : Gobo's School for Explorers
Episode 1: The Bells Of Fraggle Rock
Episode 2: Red-Handed And Invisible Thief
Episode 3: Boober And The Glob
Episode 4: The Grapes Of Generosity
Episode 5: Blanket Of Snow, Blanket Of Woe
Episode 6: Pebble Pox Blues
Episode 7: Home Is Where The Trash Is
Episode 8: Believe It or Not
Episode 9: Wembley And The Mean Genie
Episode 10: The Secret Society of Poohbahs
Episode 11: The Beanbarrow, The Burden, and The Bright Bouquet
Episode 12: Gob's School For Explorers
Episode 13: Scared Silly
Episode 14: The Great Radish Caper
Episode 15: Born To Wander
Episode 16: The Battle Of Leaking Roof
Episode 17: Playing Till It Hurts
Episode 18: Bored Stiff
Episode 19: The Cavern Of Lost Dreams
Episode 20: The Incredible Shrinking Mokey
Episode 21: A Dark And Stormy Night
Episode 22: Gunge The Great And Glorious

Episode 1: Mirror, Mirror
Episode 2: The Riddle Of Rhyming Rock
Episode 3: The Voice Inside
Episode 4: The Trial of Cotterpin Doozer
Episode 5: The River Of Life
Episode 6: Beyond The Pond
Episode 7: Gone But Not Forgotten
Episode 8: Mokey, Then And Now
Episode 9: Ring Around The Rock
Episode 10: Inspector Red
Episode 11: The Gorg Who Would Be King
Episode 12: The Honk Of Honks
Episode 13: Change Of Address
Episode 14: Gobo's Song
Episode 15: Wembley and the Bemble
click here to see where to watch