What is Happy Days about? 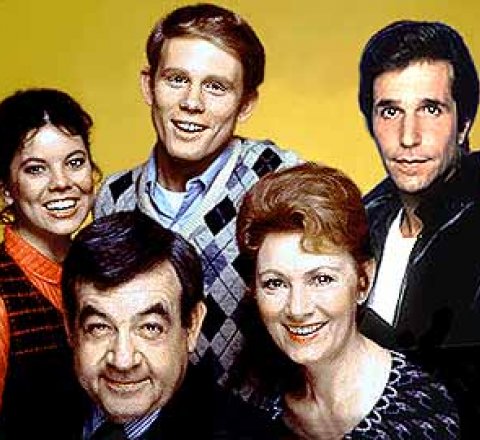 One of the most successful series of the 1970s is Happy Days, which is set in the late 1950s, early 1960s in Milwaukee, the heart of middle-class America. Happy Days tells the story of the Cunninghams, one of America's most beloved TV families played by Tom Bosley (Howard), Erin Moran (Joanie), Marion Ross (Marion), and Ron Howard (Richie). Richie and Joanie had an older brother, Chuck (Gavan O'Herlihy and Randolph Roberts), but he was phased out by the third season. Richie, who hangs out at Arnold's Drive-In with his buddies Potsie Weber (Anson Williams) and Ralph Malph (Donny Most), forms a close bond with neighborhood greaser, the Fonz (Henry Winkler). Living in an apartment above the Cunningham garage, the Fonz gives Richie advice on just about everything that he wants to know. Wearing his leather jacket atop his motorcycle while saying phrases like "aaaayyyy" and "sit on it," the Fonz is the king of cool and quickly became a cultural icon. As time passed, additional characte

Episode 1: All the Way
Episode 2: The Lemon
Episode 3: Richie's Cup Runneth Over
Episode 4: Guess Who's Coming to Visit
Episode 5: Hardware Jungle
Episode 6: The Deadly Dares
Episode 7: Fonzie Drops In
Episode 8: The Skin Game
Episode 9: Breaking Up Is Hard to Do
Episode 10: Give the Band a Hand
Episode 11: Because She's There
Episode 12: In the Name of Love
Episode 13: Great Expectations
Episode 14: The Best Man
Episode 15: Knock Around the Block
Episode 16: Be the First on Your Block

Episode : R.O.T.C.
Episode 1: Richie Moves Out
Episode 2: Richie's Car
Episode 3: Who's Sorry Now?
Episode 4: You Go to My Head
Episode 5: ROTC
Episode 6: Haunted
Episode 7: Wish Upon a Star
Episode 8: Not with My Sister, You Don't
Episode 9: Big Money
Episode 10: A Star Is Bored
Episode 11: Guess Who's Coming to Christmas
Episode 12: Open House
Episode 13: Fonzie's Getting Married
Episode 14: The Cunningham Caper
Episode 15: The Not Making of the President
Episode 16: Cruisin'
Episode 17: The Howdy Doody Show
Episode 18: Get a Job
Episode 19: Fonzie Joins the Band
Episode 20: Fish and the Fins
Episode 21: Richie's Flip Side
Episode 22: Kiss Me Sickly
Episode 23: Goin' to Chicago

Episode : I Drink, Therefore I Am
Episode 1: A Woman Not Under the Influence
Episode 2: Letting Go
Episode 3: Empty Nest
Episode 4: A Night at the Circus
Episode 5: Little Case of Revenge
Episode 6: Who Gives a Hootenanny?
Episode 7: Going Steady
Episode 8: Such a Nice Girl
Episode 9: There's No Business Like No Business
Episode 10: All I Want for Christmas
Episode 11: Since I Don't Have You
Episode 12: Hello, Pfisters
Episode 13: I Drink Therefore I Am
Episode 14: Prisoner of Love
Episode 15: Life Is More Important Than Show Business
Episode 16: Nervous Romance
Episode 17: I'm Not at Liberty
Episode 18: Wild Blue Yonder
Episode 19: May the Best Man Win
Episode 20: Babysitting
Episode 21: Turn Around and You're Home
Episode 22: Affairs of the Heart