What is Wings about? 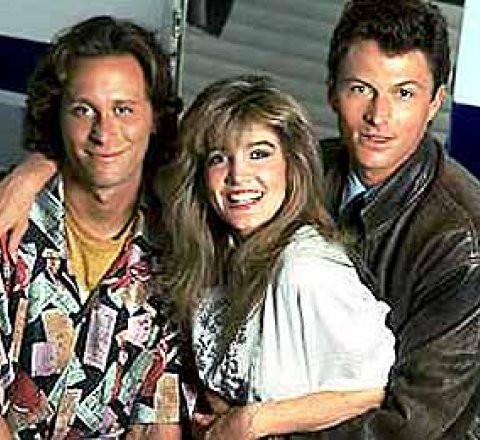 The series Wings, could best be described as Cheers 2, as it followed much the same pattern as the other series did. The similarities are numerous, such as both being easy going character comedies and being produced by the same team (David Angell, Peter Casey and David Lee). The main difference being the setting. Instead of a Boston bar being the main setting, a small airport terminal on the island of Nantucket was used as the main backdrop. The regular "gang" included brothers Joe and Brian Hackett, both pilots, who ran a one-plane local cummuter service called Sandpiper Air. They had little else in common. Joe was button-down, organized and serious, and Brian, a hang loose, free spirit. Thier mutual best friend since childhood was Helen, a once chubby but now beautiful aspiring concert cellist who ran the lunch counter. These three lifelong friends were the "three musketeers". The other regulars included, Faye, Sandpipers rather flighty but always perky, sixtyish ex-stewardess who ran the ticket counter; Lowell Mather, the eccentric airport mechanic and Roy, the loud mouth blow hard who ran rival airline Aeromass.

Episode : Sports & Leisure
Episode 1: The Puppetmaster
Episode 2: The Story of Joe
Episode 3: A Little Nightmare Music
Episode 4: Sports and Leisure
Episode 5: A Standup Kind of Guy
Episode 6: It's Not the Thought, It's the Gift
Episode 7: Hell Hath No Fury Like a Policewoman Scorned
Episode 8: High Anxiety
Episode 9: Friends or Lovers?
Episode 10: There's Always Room for Cello
Episode 11: A Terminal Christmas
Episode 12: Airport '90
Episode 13: Love Is Like Pulling Teeth
Episode 14: The Tennis Bum
Episode 15: My Brother's Back - And There's Gonna Be Trouble
Episode 16: Plane Nine From Nantucket
Episode 17: Looking for Love in All the Wrong Places
Episode 18: Love Means Never Having to Say Geronimo
Episode 19: All in the Family
Episode 20: Mother Wore Stripes
Episode 21: Murder She Roast
Episode 22: Duet for Plane and Cello

Episode 1: The Naked Truth
Episode 2: Is That a Subpoena in Your Pocket...?
Episode 3: The Taming of the Shrew
Episode 4: I Ain't Got No Bunny
Episode 5: If Elected, I Will Not Live
Episode 6: My Brother's Keeper
Episode 7: Crate Expectations
Episode 8: Ladies Who Lunch
Episode 9: Try to Remember the Night He Dismembered
Episode 10: The Late Mrs. Biggins
Episode 11: The Bogey Men
Episode 12: Marriage, Italian Style
Episode 13: Divorce, American Style
Episode 14: Stew in a Stew
Episode 15: This Old House
Episode 16: Planes, Trains and Visiting Cranes
Episode 17: Das Plane
Episode 18: Take My Life, Please
Episode 19: Four Dates That Will Live in Infamy
Episode 20: The Bank Dick
Episode 21: Say It Ain't So, Joe
Episode 22: As Fate Would Have It

Episode 1: Lifeboat
Episode 2: The Fortune Cookie
Episode 3: Noses Off
Episode 4: Blackout Biggins
Episode 5: Mathers of the Heart
Episode 6: Two Jerks and a Jill
Episode 7: It's So Nice to Have a Mather Around the House
Episode 8: Just Say No
Episode 9: It May Have Happened One Night
Episode 10: The Customer's Usually Right
Episode 11: Exit Laughing
Episode 12: What the Cabbie Saw
Episode 13: Labor Pains
Episode 14: I've Got a Secret
Episode 15: The Gift (1)
Episode 16: The Gift (2)
Episode 17: I Love Brian
Episode 18: The Key to Alex
Episode 19: The Houseguest
Episode 20: Goodbye, Old Friend
Episode 21: Another Wedding
Episode 22: Date Package Number Seven

Episode 1: Whose Wife is it Anyway?
Episode 2: Twisted Sister
Episode 3: The Shrink
Episode 4: The Spark and How to Get It
Episode 5: The Waxman Cometh
Episode 6: Is That a Ten-Foot Sandwich or Are You Just Glad to See Me?
Episode 7: All's Fare
Episode 8: Miss Jenkins
Episode 9: If It's Not One Thing, It's Your Mother
Episode 10: The Wrong Stuff
Episode 11: Insanity Claus
Episode 12: She's ... Back
Episode 13: Have I Got a Couple for You
Episode 14: Fools Russian
Episode 15: Let's Call the Whole Thing Off
Episode 16: Remembrance of Flings Past (1)
Episode 17: Remembrance of Flings Past (2)
Episode 18: Gone But Not Faygotten
Episode 19: Ex, Lies and Videotape
Episode 20: Portrait of the Con Artist as a Young Man
Episode 21: The Love Life and Times of Joe and Helen
Episode 22: A House to Die For
Episode 23: Nuptials Off
Episode 24: Et Tu, Antonio?
Episode 25: Boys Just Want to Have Fun (1)
Episode 26: Here It Is: The Big Wedding (2)