What is Rurouni Kenshin about? 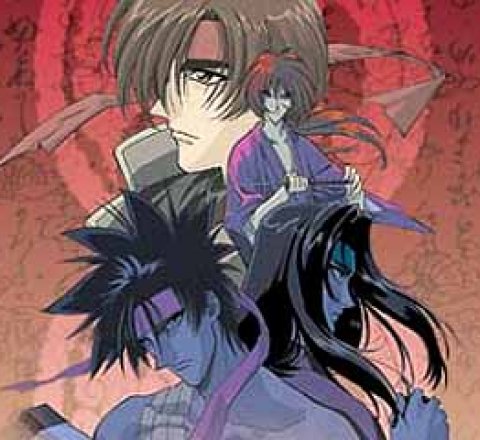 "140 years ago in Kyoto,with the coming of the 'Black Ships', there arose a warrior called Hitokiri Battousai. Felling men with his blood stained blade, he closed the turbulent Bakumatsu era and slashed open the age known as Meiji. Then he vanished, and with the flow of years, became a legend. In the 11th year of Meiji, in the middle of Tokyo this tale begins..." Rurouni Kenshin (the OAVs and Movie are known as Samurai X) tells the story of a wanderer named Kenshin, who used to be called Hitokiri Battousai (Hitokiri means Assassin) during the Japanese civil war, and is now trying to make up for his past and all his murders by helping those in trouble with his reverse-blade sword and by using his powerful technique called Hiten-Mitsurugi Ryu to battle oppressors of freedom and justice, yet struggling with himself and his own murdering self. During the series Kenshin joins others in his quest: Kaoru Kamiya, a young orphan girl who became tutor of the Kamiya-Kashin Ryu Kendo style; Sanosuke Sagara, a mercenary who used to bear the name Zanza and fights just with his incredibly powerful fists; Yahiko Myojin, a young boy who was rescued by Kenshin from a band of thieves and now a pupil on Kaoru's dojo; and Megumi Takani, a female doctor who was rescued by Kenshin from a band which forced her to make a lethal drug. Together they all fight those who oppress the weak while they seek their destiny as well happiness and redemption. The series is based on a homonymous manga created by Nobuhiro Watsuki, which was first published in 1994.

Episode : Prelude to the Impending Fight
Episode : Shock! Reverse Blade Sword Broken
Episode : The Creation of the Reverse-Blade Sword
Episode : The Choice for Life
Episode 1: Strongest Opponent From the Past
Episode 2: A Devil of Vengeance
Episode 3: A Wish Unrequited
Episode 4: Change Tears to Courage
Episode 5: For the Title of Strongest
Episode 6: The Girl Bandit
Episode 7: Conquered Village
Episode 8: Across the Boundary Between Edo and Meiji
Episode 9: Shock! The Reverse Blade is Broken
Episode 10: Sanosuke's Secret Training
Episode 11: The Creator of the Reverse-Blade Sword
Episode 12: A Killer Without Mercy
Episode 13: The Ultimate Technique of the Hiten-Mitsurugi Style
Episode 14: The Formation of an Alliance
Episode 15: Between Life and Death
Episode 16: A Decisive Battle like Violent Waters
Episode 17: As If to Fly
Episode 18: Purgatory Bursts into Flames
Episode 19: Crash! The Lethal Punch, Futae no Kiwami!
Episode 20: Reborn to Salvation
Episode 21: The Wolf Destroys the Shingan
Episode 22: The Promised Time Has Come
Episode 23: Wake Up Now!
Episode 24: To Make a Miracle
Episode 25: The Giant versus Superman
Episode 26: Hiten versus Shukuchi
Episode 27: The Tragedy of a Stormy Night
Episode 28: A Duel With an Extreme Moment
Episode 29: Two Men at the End of an Era
Episode 30: The Age Chooses Shishio?
Episode 31: Not Out of Luck!
Episode 32: The Man Who is Chosen for Victory
Episode 33: The Juppongatana Who Remain (aka The Choice for Life)
Episode 34: Kyoto, the Engraved Memory